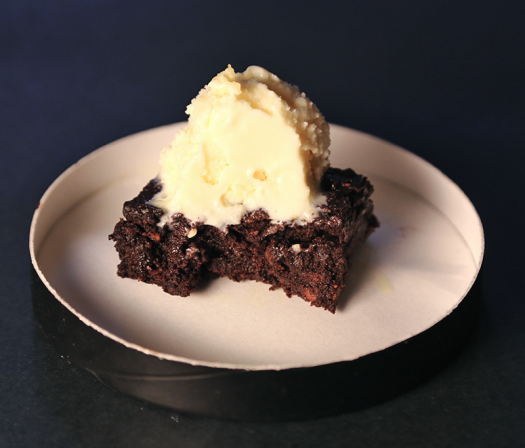 Want a tray of brownies without my delirious rambling?

Otherwise, prepare to read about my adventure in sweet potato brownies™.

Earlier this year I posted a recipe for Sweet Potato Brownies. It was an on-the-whim type of recipe that I made once, decided was good enough, and posted. They were good brownies, super melty and soft with lots of chocolate flavor, but they had a notable starchiness from the sweet potato that I couldn’t get over. Eventually I put the post on private and forgot about it.

Then yesterday I was hit with an uncontrollable and explainable desire to make the damn best sweet potato brownies, so I picked myself off the couch and went to the store to buy sweet potatoes.

My motivation grows stronger. I decide some kind of fruit puree might add moistness, better yet, carrot puree which I find more mild than applesauce, and that the food processor likely overworked the sweet potato. Fork mashing it is.

They are good, but I am on a quest for the best. By this point I am also running out of maple syrup. I decide to start making half batches.

I go to sleep, dreaming of sweet potato brownies.

The next day I start immediately after work. I double the oil to 2 tbs (1/4 cup if I were making full batches), and mash the sweet potatoes with it, like when making mashed potatoes, thinking this will prevent the starch from “developing”.

But I’m not finished yet. I decide to see what happens when I reduce the amount of sweet potato. I reduce it from 3.5 to 1.5 ounces and mash the sweet potatoes with a tsp of oil. I reduce the oil in the batter back down to 1 tablespoon.

I decide to recreate a new version of Batch 4 to see whether I screwed something up that led to its liquidy batter consistency. I’ve made so many sweet potato brownies that I’m not even sure I remember how exactly to make them.

This time I add 2 ounces of sweet potato, which I mash with 1/4 tsp of oil. Probably not necessary, but who am I to question this convoluted method I’ve developed? I’ve run out of good chocolate chunks and am using shitty chocolate chips. I learn that chocolate quality really matters in brownies.

I want to determine if 2 tablespoons of oil are necessary for 3.5 ounces of sweet potato, or whether I can get away with only one. But I’m going to be a bad experimenter and reduce the sweet potato to 3 ounces at the same time. I’m starting to think this is a concave problem with no absolute maxima, but I’m still hoping to stumble upon a local maxima. If only I could apply stochastic gradient descent to cooking.

I’ve found the recipe, the quest isn’t quite over. Perfection is one thing, but repeatability and scalability (I had been working with half batches) is a whole ‘nother beast.

The next day I prepare for the final and most intense battle: baking a full pan of sweet potato brownies.

In conclusion, I’m completely nuts, but hey, I have the most incredible tray of sweet potato brownies in the fridge right now. I’m going to go hibernate for a very long time, only waking occasionally to stuff my mouth with brownies (maybe not a good idea considering the instant espresso, but based on what I’ve written, it’s safe to assume my judgement’s muted). Meanwhile, you should go make some sweet potato brownies so we can bask in their glory together.

You can find the full recipe here.

Hey! I'm Mia, the graduate student and grocery store enthusiast responsible for Chomps of Life. I like (vegan) food ranging from chickpeas and tofu to hot fudge and ice cream, and this blog reflects that.
Loading Comments...
%d bloggers like this: